Eight youth who participated in two recent TYHP hunts were able to have the Best Answer Ever to the question, “So what did you do this weekend?”  They could reply, “I went elk hunting in the mountains of west Texas with TYHP!”

In mid-September TYHP was blessed to offer two Adventure Hunts for free-range elk on a large property in the spectacular Davis Mountains of Texas’ Trans-Pecos region.  Led by myself and fellow TYHP staff member Braxton Hicks, these hunts lived up to the billing of Adventure Hunts – the terrain was rugged, days were long, nights were short, and dozens of miles were hiked in pursuit of elk.  And as elk hunters know, finding elk is one thing, getting a shot on one is another!

This unique hunting opportunity materialized on short notice in July at TWA’s annual Wildlife Convention.  During a TYHP presentation about Adventure Hunts in a committee meeting, a question was raised from a representative of The Nature Conservancy – how much lead-time do we need to plan such a hunt?  Subsequent discussions and a site visit at TNC’s Davis Mountains Preserve led to a rapid planning process for taking kids elk hunting!

Given the almost certainty that kids who would be interested in such a hunt would have little or no experience or knowledge about elk and elk hunting, and with anticipation of the rigors involved in such a hunt, the TYHP staff quickly designed a special workshop entitled Elk Hunting 101 to help potential hunters prepare, as pursuing elk is no cakewalk.  Held at Mason Mountain WMA, the workshop featured instruction on shooting skills, use of optics to find game, and had a classroom session about elk biology and behavior as well as hunting methods and field care of meat.  Participants in the elk hunts were randomly selected from the workshop attendees.

The game plan consisted of setting up two hunts in mid-September, with groups of 4 hunters on each of the back-to-back weekends.  Each hunt was set up to be longer than a normal TYHP hunt, with the youth/parents arriving on a Thursday at noon and staying through Sunday to provide more hunting time.  Basic plan was to start with a shooting clinic on Thursday, hunt that evening, and then hunt all day Friday and Saturday, as well as part of the day Sunday.

Braxton and I were assisted with guiding by the elk hunting expertise of Corbin Neill and Andy Sobotka (first hunt), and Jose Etchart, Benny Benavides, and Reis Ladd (second hunt).   The groups had a fantastic experience in the mountains with lots of elk action, and among the 8 youth hunters 6 beautiful bull elk were harvested!  Cooks James Burnup and David Oates provided incredible meals, and we offer a special thanks to Game Warden John Apgar for providing a superb shooting clinic before the second hunt.  Additionally we wish to thank Texas Hunting Resources (www.texashuntingresources.com) for use of their Can-Am UTV during the second hunt.

The TYHP hunters had a unique opportunity to learn elk hunting methods such as spot-and-stalk and calling – since the rut was on, elk were responsive to calling, and several of the bulls harvested were actually called into close shooting range.  Once our hunters had an elk on the ground, they learned all about skinning and quartering a large animal in the field.  Packing out meat to the nearest road also provided a great learning experience.  When back at camp, there were impromptu clinics on how to bone-out an elk quarter and how to skin an elk skull to prepare the overall cape for taxidermy.

What were elk encounters like?  I can relate a personal example of this from the second hunt, on which I guided 14-yr old Josh and his dad Jason.  After a morning that started with us high on a glassing point an hour before dawn, we later followed the sounds of a stirred-up bull who was bugling constantly.  A long hike closed the distance somewhat, and the bull was responsive to both bugles and cow calls that I made.  However, he had a real cow with him and ultimately eased away from us, with our last view of him over 600 yards away across a drainage.  Feeling that a more aggressive approach was needed, we made a plan to move in on him.  As we got closer we realized the bull had crossed a boundary fence onto neighboring property.  But another bull began bugling nearby, on the right side of the fence.  Game on!  This bull responded readily, and before long we had both bulls bugling at us, and we were between them.  The original bull backed off, but the second bull slowly but surely became more agitated and excited as we worked closer to him and heated up the cow calls.  By then it was 12:00 noon, not the typical time of day in which elk cooperate with calling.

It appeared that this bull was in his bedding area – the cover was thick, and there were numerous rubs on surrounding trees as well as a dried-up wallow.  Judging by his jarring bugles I estimated the bull was no more than 50 yards from us, but we could not see him.  After about thirty minutes of working on raising the bull’s excitement level with a variety of cow calls, he finally became convinced there was a girl who needed his attention, and I could hear sticks begin to break as he headed our way.  Josh stood with rifle ready, resting it on a tree, and I was at his side calling and giving instructions.  Jason was behind us, videoing what we hoped would be a shot opportunity.

With the thick cover we knew any shot would be close, and Josh turned down the scope on his .308 to 4X magnification.  Soon the massive 5×5 bull appeared at 25 yards, and as soon as his vitals were in the clear Josh fired!  Cue the chaos – the bull ran up the slope, Josh spun around in a state of disbelief but correctly called that he had hit the bull.  Jason scrambled to continue his attempt to film.  I sidestepped to keep eyes on the elk – I could tell from the way it moved that he was hit well.  The elk stopped after traveling 50 yards to look back at us, and Josh shot him again to make sure he was anchored.  Then the real celebration commenced!  An unbelievable ending to an hours-long saga.

When Josh arrived for this hunt, he had never seen nor heard an elk in-person.  Within 24 hours, he had seen several elk, heard literally dozens and dozens of elk bugles, and had harvested a magnificent bull!. Adventure at its finest!

The Davis Mountains scenery was stunning, and the early fall weather was perfect.  In addition to numerous elk, other wildlife sightings included white-tailed deer, mule deer, javelinas, aoudads, coyotes, feral hogs, hummingbirds, and reptiles such as horned lizards, rattlesnakes and coachwhips.  It was a glorious time to be in the mountains – one morning in the distance several bull elk were bugling in a creek bottom, and wild turkeys were gobbling back at them!  It is safe to say not many people in Texas were experiencing a symphony like that!

Although the harvested elk were a tangible result of the hunts for 6 youth, the meat comes and goes.  The true trophies of these hunts were secured by everyone present – the memories, stories, friendships made, bonds strengthened, and adventures enjoyed.  When we all parted ways, the youth were reminded that they can do hard things, they can prevail over challenges, and there is a huge world of adventuresome hunting awaiting them if they choose to embrace it!  Watch the TYHP calendar for more Adventure Hunts as we build this segment of the program. 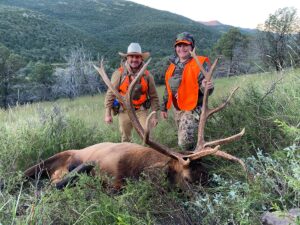 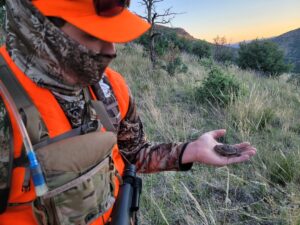 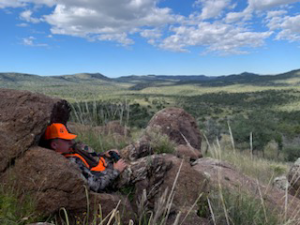 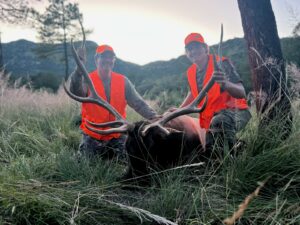 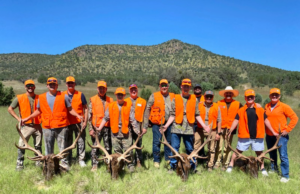 In response to a declining number of youth hunters in the state, the Texas Wildlife Association and Texas Parks and Wildlife Department organized the Texas Youth Hunting Program (TYHP) in 1996. To date, TYHP has provided over 55,000 Texans with safe, educational, outdoor experiences while instilling an appreciation for the valuable role private landowners and hunters play in wildlife conservation.